The metro was free this evening and we made our way in a full train to Gaite for the Menu de Saint Sylvestre produced by Mathias Thiery.  We were greeted by Madame Thiery who is convinced that this will be for the last time, but she has been saying this for at least the last three years. 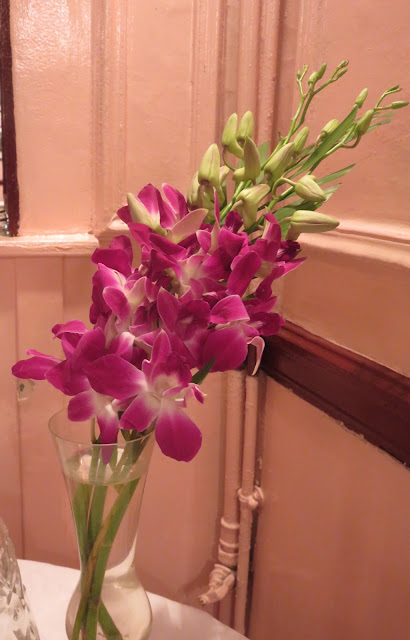 The room is small and intimate. There was some English spoken but the diners were mainly French.  Just about everybody had the menu and the Champagne flowed freely. 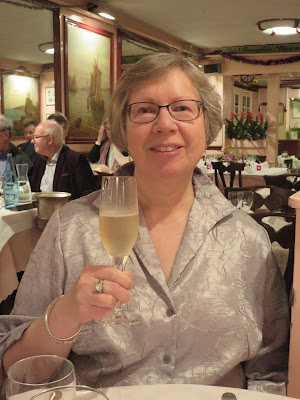 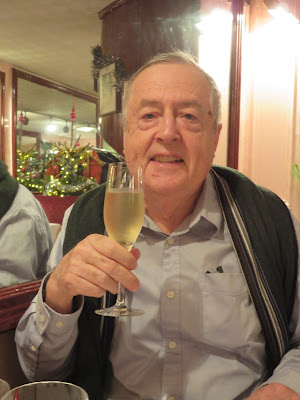 We started with an excellent bottle of Champagne and switched to a half bottle of Brouilly, (beaujolais) for the meat course.  There was just one young lady assisting Madame throughout the evening and they were both very busy indeed.


By this time we were feeling no pain.  The venison was rich and dark while the chestnut puree provided a good accompaniement.
There followed coffee and mignardises which I forgot to record.  What a meal.  It was well paced and we were never waiting very long.  There was fresh cutlery for each course but the server kept track of everything impeccably.  She opened the Brouilly in good time for the venison but I was not allowed to taste it until I had finished my champagne. As we left Madame Thiery explained again that they were planning to retire so we left it that if they were still here next year she would make a reservation for us.  M. and Mme Thiery will be sadly missed.

We left in good time to get back to Villiers and walked along the Boulevard de Courcelles to the west entrance of the closed Monceau Parc where we could view the Arc de Triomphe without any of the goings on in the Champs Elysees.  The temperature had been up to 13 during the day but had dropped to about 6.  Even so I was able to be out without my parka or long johns.  There was a sound and light show and at midnight there was a short fireworks display.

Posted by Colin Churcher at 12:43 AM No comments:

There was a threat of rain and high winds today and the Square des Batignolles was closed because of the risk of falling tree branches.
We walked up to Monceau Parc which was not closed, stopping on the way to admire the work on the Banque de France building onthe Boulevard de Malsherbes. It is magnificent. 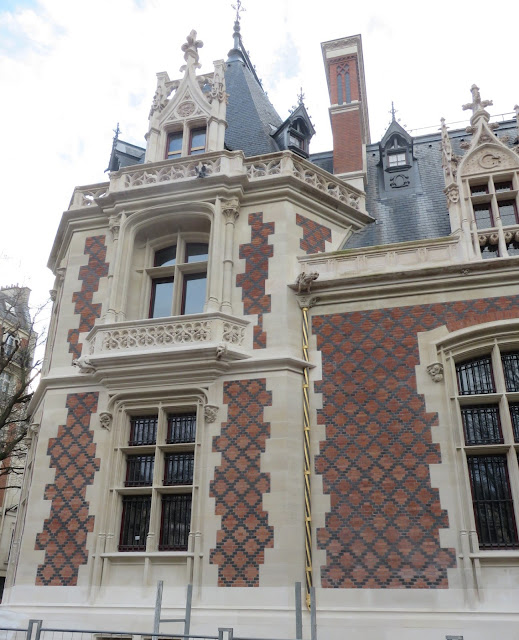 We wandered a little off the beaten track in Monceau and found an ancient plane tree that was planted in 1814 - it is 203 years old and still counting.


The New Years Eve celebration was at Aux Iles Marquises - more about this later.

Posted by Colin Churcher at 8:22 AM No comments:

Everywhere was wet this morning but last night's heavy rain is now the occasional light mist.  We walked the half hour or so to the the Jacquemart Andree musee on Boulevsrd Hausseman.  It is a large house filled with priceless antiques, paintings etc.  We had thought that coming here around lunch time would be a good time because people would be otherwise engaged.  However, the place was packed and it was occasionally difficult to appreciate the rooms. 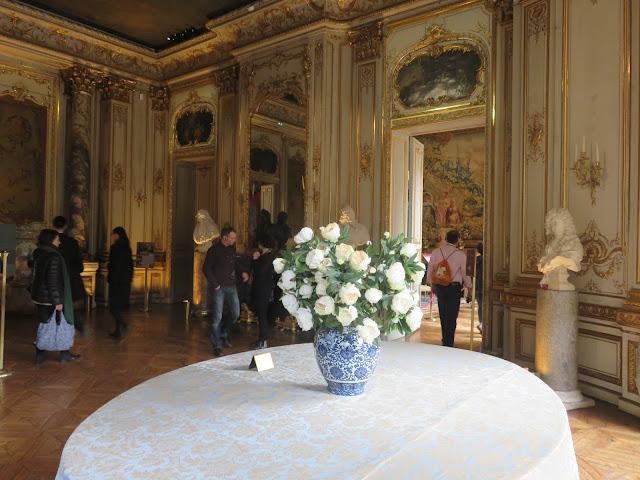 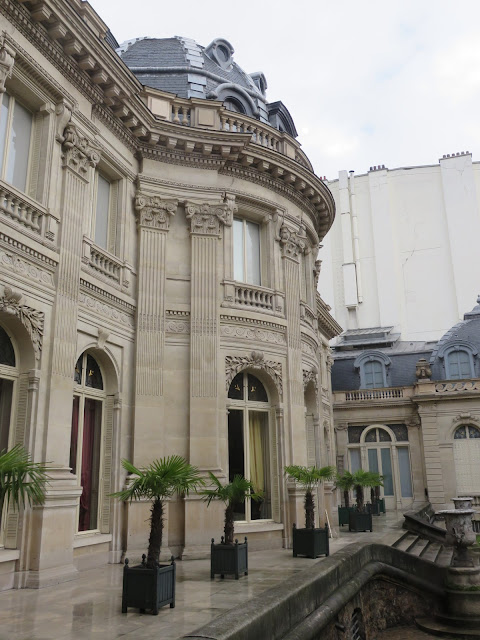 The house and exhibits are very much in the same style as the Wallace Collection in London, although the Wallace Collection is possibly better preserved and presented. It is difficult to imagine how one family could be so rich as to acquire all of this.  The revolution got rid of the monarchy but it was replaced by the aristocracy.

We ate dinner at le Bistrot d'Id on Levis.  This is a neighbourhood bar which has a pretty good menu. We had Civet de Sanglier (wild boar stew) with tagliatelli and a pichet of Fitou red wine. It was good and quite cheap.
Posted by Colin Churcher at 6:51 AM No comments:

The weather forecast was for heavy rain today and it proved correct.  I decided to get a Mobilis ticket and ride some more trams.  I took the metro to Saint Denis Porte de Paris and rode the tram T8 but this time to the shorter branch up to Ville Tanneuse.  This is right next to the Grand Ceinture freight line and I could see the station for the T11 tram train line but there were no signs telling me how to get there.  I get the impression that although this line is open it is not "officially" part of the network being poorly signposted and not shown on any maps. I took the tram to Dugny station but it was not apparent how to get to the Georges Valblon Parc. It was raining anyway.


The rain was getting worse so I decided to return to Saint Denis Porte de Paris and catch the metro line 13 all the way south to Chatillon Montrouge where the rain was even worse. I caught the T6 rubber tired tram all the way through from Chatillon to Viroflay Rive Droit. There is a long continuous climb out of Chatillon and a long downhill stretch into a long tunnel under Viroflay. The trams are guided by one rail and the weight is carried on rubber tires. The ride was not bad as the roadway is all concrete. However, it was nowhere near as smooth as on a steel wheeled tram.


I made my way in pouring rain to the RER line L station which is directly above the tram terminus and caught a new Z50000 train right into Saint Lazare.


Posted by Colin Churcher at 11:15 AM No comments:

It was a beautiful day today with clear blue skies and little wind.  We took the metro and RER and walked across Montsouris Park.  This seems to be very similar in design to the Square des Batignolles although on a larger scale - waterfalls, lake with island, concrete simulated wooden fencing, water birds, beautiful mature trees.  There were a few green parrots in one area, their raucous cries cannot be mistaken. 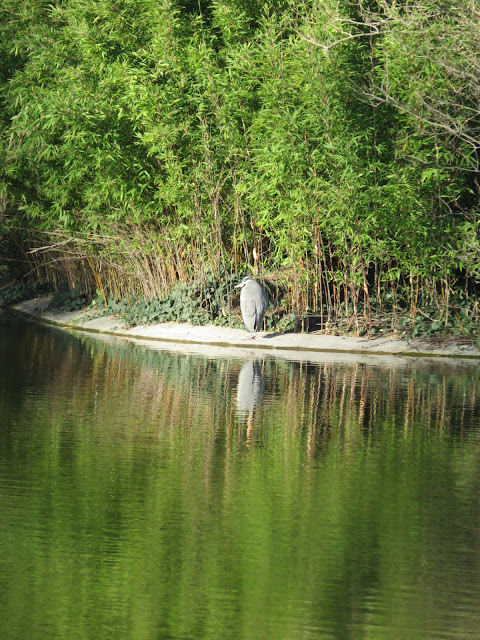 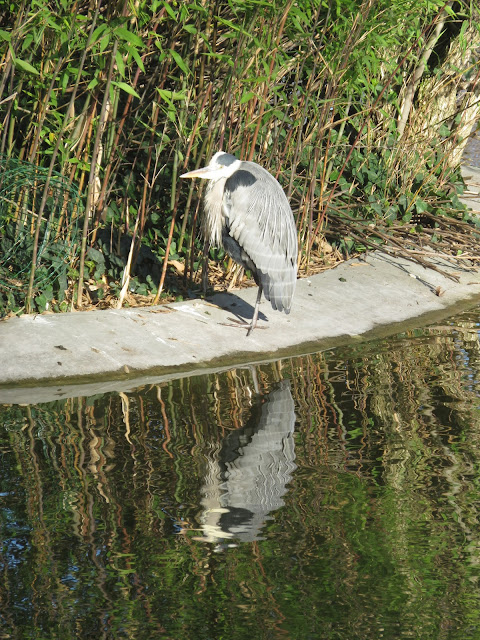 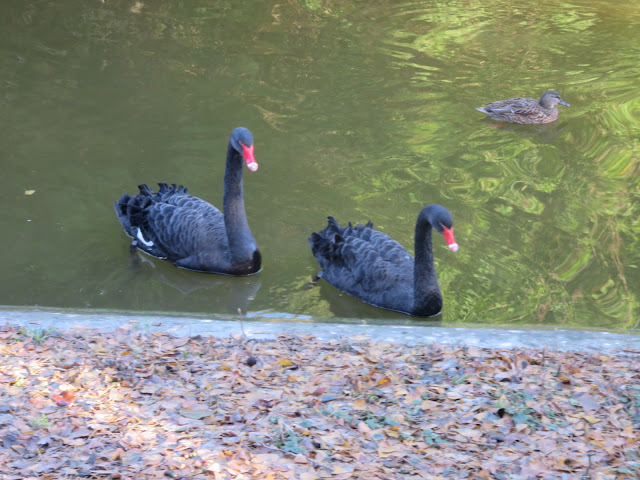 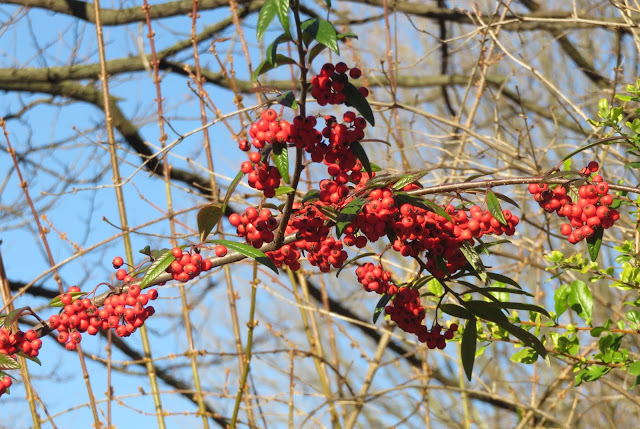 We had lunch at the Chinchin a restaurant close by which we had found last year.  It is a small local one with a good kitchen and friendly service.

Mary had a white Macon while I had a dark red Cahors.  The service was very friendly and the place as well used by locals, some with small children.

After a long lunch we took the tramway to Porte de Vincennes and metro line 1 to the Bastille to take a look at the Place des Vosges.  It was busy but all I wanted to do was to stand there and take a 360 degree look at this marvelous square.

It was good to take advantage of the springlike weather as it will likely rain tomorrow.

Posted by Colin Churcher at 8:57 AM No comments:

The weather forecast was not too good today so we decided to visit the Museum of Fairground Arts at the Cour St. Emillion near Bercy. 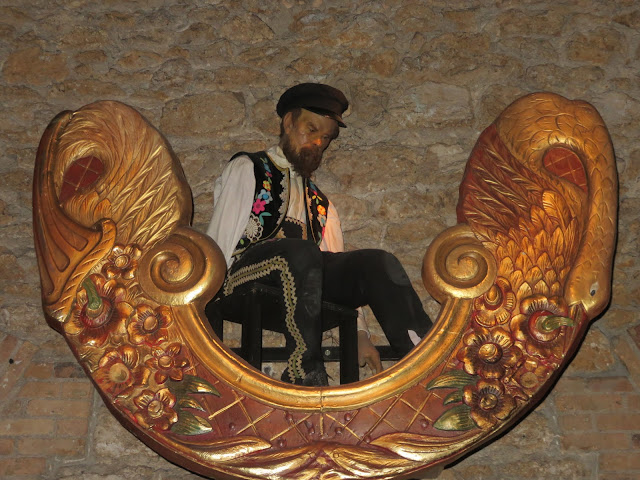 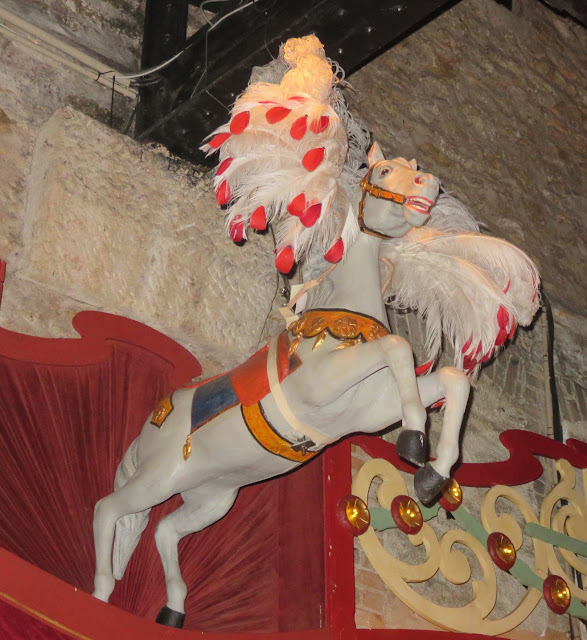 Some of the mechanical figures were very well done

Probably the worst version of Bach's Prelude K565 that I have ever heard. It would have been  a little better without the human voice. 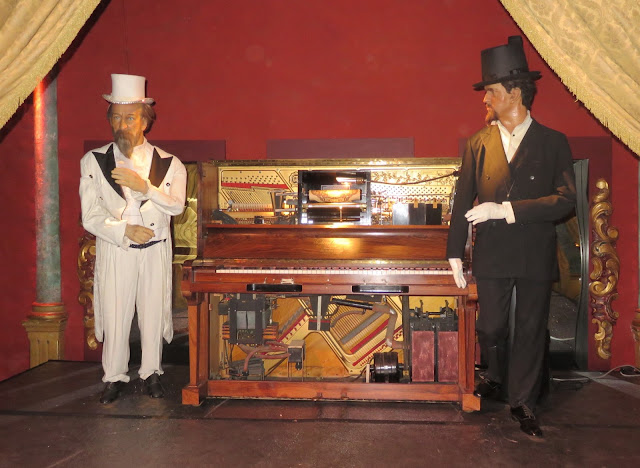 We went back to the Gare de Lyon and took a table at Le Train Bleu restaurant.  Never look at the prices here but not only is there excellent food and great service but the room is absolutely breathtaking. 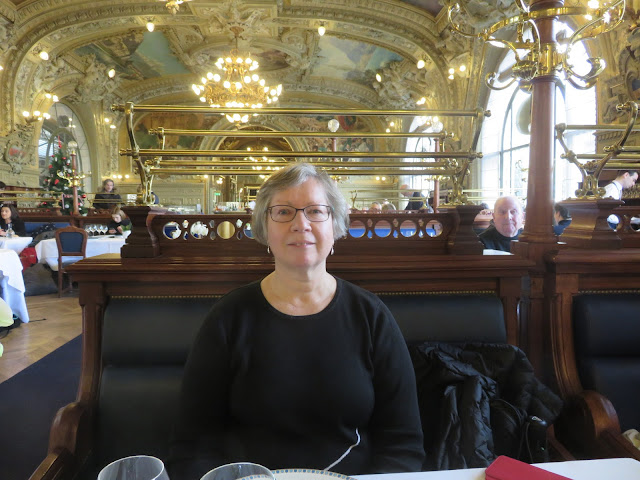 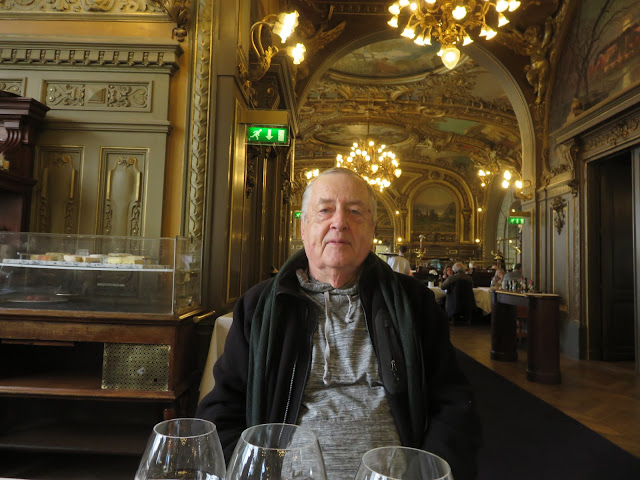 I started with mushrooms in a chestnut soup and finished with the traditional baba au rhum.  We both had the lamb with potatoes au gratin and Mary finished with a cafe gourmand.  The Saumur Champigny (red Loire) wine was a good accompaniment. 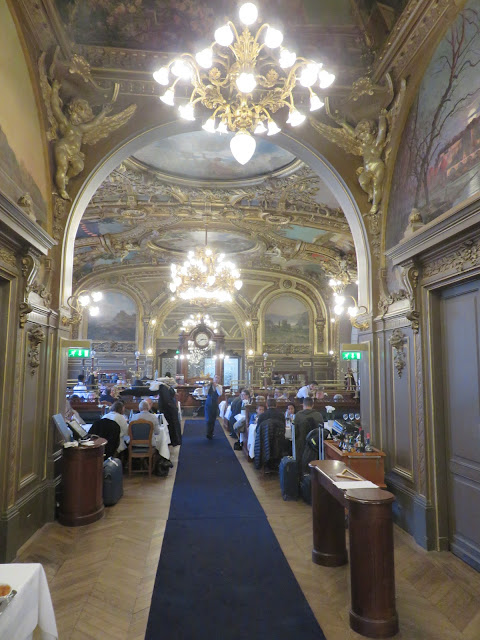 Seeing that we were not pressed for time we decided to take the bus back to Saint Lazare. This was very slow, particularly between the Opera and Saint-Lazaare but it allowed us to go past the viaducts to Bastille, the place de la Republique and the Grands Magazins.
Posted by Colin Churcher at 9:26 AM No comments: